Over on his Tumblr blog, Mike Doughty lead an article on touring with this paragraph:


Radiohead wouldn’t exist without early major-label funding. The future won’t bring new Radioheads. All I want to say here, truly, is: let’s get used to it.

This far, I agree. Hell, I started with something damn near identical in Part I of this series, which came out before his, so I didn’t steal it. XD

He follows with this:


This means that there will be fewer bands.

I strongly disagree, but not in the obvious way.

A bunch of things I was going to talk about today – the way that old-school touring doesn’t work – he covered, just after I’d finished outlining this article. Go read his, if you’re curious. But to summarise: less money, fewer traditional venues (by which I mean live-music bars and clubs), the dissolution of concert-going culture (and it is mostly gone), much higher travel costs, and more. Lodging’s no picnic either.

Take that as read; they are the facts on the ground.

One of Mike’s answers is: don’t have a band. They’re too expensive, it’s too much money, it’s $6000 a week for bare-bones, you can’t do it. Sound amazing as a soloist or duo.

I disagree strongly with that dollar figure, but leave that aside for now.

“Don’t have a band” is a solution, and it does work. And in fact you’ll have to do that to some degree – or most of you will, there are always exceptions. As part of that, you have to find new kinds of places to play and new ways to book and so forth; we’ll get to that, I swear to you.

But he’s absolutely wrong about fewer bands. Fewer bands is not actually the answer. More bands is the answer.

Here’s how it works:

You want to tour. A lot of musicians don’t want to tour, but do want to play. They’ll have day jobs they like, but they’ll want to play out and put serious work into it.

So you tour around as a solo or duo at first. As you’re doing that, you network the living fuck out of all the good local people you can, and build enough contacts to have a band in every town. Or, at least, have one in the central towns within an area that’s a day-trip away from shows.

This has actually been my game plan with CRIME and the Forces of Evil. A lot of people seem to think I want to be a solo act. Were that the case, I wouldn’t have a band-style name.

This isn’t bad planning; it’s a strategy. And that strategy has been: work my act up, play far above where my few years of experience would indicate (which involves a lot of catch-up in skills), write an assload of songs, get attention, get known…

…and start attracting Forces. An ever-shifting cloud of supervillains musicians, non-travelling or even travelling musicians with whom I get to play in different towns and venues. We meet up, we practice a couple of times together, we do a few shows, it’s awesome, we go our separate ways until we come back together again.

Not entirely unlike this

The best part is, everyone get something out of it. Touring musicians who want bands get bands without the travelling expenses. Limited-touring people get a chance to step up, play with more people, build into however much mobility they want. Non-touring musicians get to be a part of it, for reals, without any of the touring stress.

Alternatively, there are still a fair number of cover bands out there. This can and should be a new lease on life for them. They’re already all about covering other bands; now they can do it with the actual act.

And what makes this workable is the same technology that upended the old system: cheap, easy, reproduction. You make a scratch recording of how you want a song to sound live. Channel left is everything from the song except the musicians you’re meeting up with; channel right is the part they need to learn. Play both, you get the whole song.

When you get into town, you rehearse a couple times as a unit, mostly to practice timing, and then you do your shows.

Now, it’s a skillset, as with everything else. But it’s a skillset people can and will learn. I know they will, because I didn’t invent this. It’s already happening. SJ Tucker was my gateway for this, but it’s all over the place in both filk and nerdcore, two of the big forms of geekmusic.

It even has names. Sometimes it’s called the Instaband concept. I think of it as the Hive, but that’s my Teen Titans fandom showing, or rather, the AU fanon where…

Regardless, I saw this happening and thought, I want that. I’m adapting it to my own needs, and I’m trying to build on it and improve it, of course, and I write about things because I’m one of those people who sees a problem and a possible solution and starts waving their hands wildly about going GUYS GUYS GUYS OVER HERE OMG!

Which I like to hope is a contribution as well.

Also, I recognise the connection to pre-recording-industry town bands and orchestras. If you don’t know; every little town, even really little ones, used to have a little band that played all the events – holidays, parades, whatever. It’d be made up of all the local people who had businesses or farms or whatever, but who liked playing music. Touring musicians would utilise them, too. 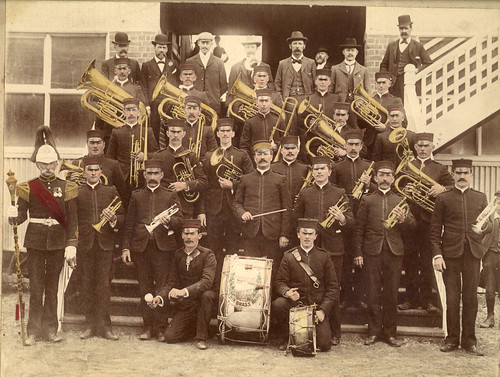 But it was much harder in many ways, because while you could have sheet music, you couldn’t know what it should sound like. So quality was lower, and it was supplemented by touring bands as that became more possible. With large touring bands becoming economically unviable, we’re kind of going back to that system, only this time, with far better tools – and better quality.

In short, all of this can happen, because it is and has done before. Given the correct circumstances, it will again.

And we’re over 1000 words already, so that’s all for today. We’ll talk about where to play out in a post-concert culture, and ways to make money at it, next time.

This is Part 4 of Music in the Post-Scarcity Environment, an ongoing series of articles about, well, what’s on the tin.</p>

Mirrored from Crime and the Blog of Evil. Come check out our music at:
Bandcamp (full album streaming) | Videos | iTunes | Amazon | CD Baby