I’m not sure what to say when a series intended to be two parts runs over five long and some of those parts have two parts on their own. Probably, it means I must learn to write shorter posts.

To recap: the old touring model became a problem, particularly for bands, which are are expensive. We talked about the instaband/hive band model in response; go here to refresh your memory.

Of course, all that said, you still shouldn’t turn down paying old-school gigs when they pencil out. Take those! Money matters!

But building a career that way is much more difficult than it used to be. Concert culture is really kind of at a nadir right now. It’s not that there aren’t standalone concerts in traditional venues – of course there are! I go to some! But it’s not a thing, like it once was, and more importantly, it’s not a way to build fans like it once was.

I don’t know what killed that culture – the reputation for expense, the hassle venues and labels put you through in the 80s and 90s to prevent bootlegging1, cowardice over “terrorism” and crime – despite crime declining steadily for three decades people talk about “how bad it is” out there – or maybe it’s all this woman: 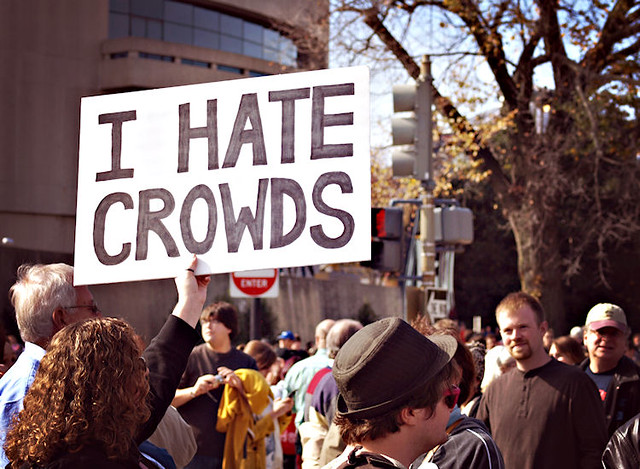 Or maybe it’s the industry again, with their crackdowns on unlicensed venues, and the cost involved in being one. I know venues around here who were shut down over licensing issues.

It could be any or all of the above, or something I haven’t even listed. Regardless, the culture is not what it used to be. I know too many musicians who have seen their incomes drop 50-70%, and too many who have just dropped out entirely, to think otherwise.

So what to do now? Where do you get started?

The first thing to talk about the house concert. These aren’t new; folk musicians have done these for a long time. But in other genres, these used to be mostly college neighbourhood excuses for drinking and party riots – if you haven’t seen the Runaways biopic, you might, there’s a good example of what they used to be in that film. Spoiler: they sucked.

Over time, however, they’ve become civilised. There are house concert circuits, there are house concert providers who host and take care of you, and do this on a regular basis. Terms are all over the place, of course. Most don’t charge, some want a percentage of the suggested donation, but even that’s generally just to cover expenses.

So what do the hosts get out of it? They get an event, and social credit – a key currency in any post-scarcity environment. They get to be part of it; people who do this like music and care about it, and want to be a part. This is one way.

Meanwhile, you’re offering an experience they aren’t going to get in any other venue. You’re offering something that’s close and personal and right there. And at the same time, you are getting a venue and a chance to make fans.

Seriously, a crowd of 6-12 people in a living room gives you your best shot of doing the most important thing you can do starting your career: making that personal connection, becoming meaningful to somebody, and through that, re-establishing the value of purchase that we talked about way back in Part Two of this series.

I mentioned these aren’t new, right?

Start by getting people who’ve heard you on the internet to host. If you’re lucky you can get fans to do it (hi guys! ^_^ ). Even if the turnouts are tiny, you’ll need the experience and the references. Once you’ve done some of those, you might be able to get the attention of people who throw these regularly. And from there, maybe you can get onto the circuits, if that’s where you want to go.

But don’t do them if you hate them. Don’t force yourself. People will know.

Event shows are another break-in point. Anything where there’s already an event that you can join is an opportunity. You gain cred by showing that other people are interested in your art. You get a crowd already there for something; you don’t have to overcome the stay-at-home inertia.

For example, I’m a musician, but I’m also a venue – I run nwcMUSIC, a mini-music-festival under the auspices of the Norwescon science fiction convention. I don’t have a budget; I don’t pay; but like a good house concert venue, we take good care of you. You get to play in a good environment to a lot of people who are already out at an event and therefore a lot more likely to check you out, stay and talk with you later. You end up with four days of meet-and-greet. You get to do panels; hopefully, you impress people. 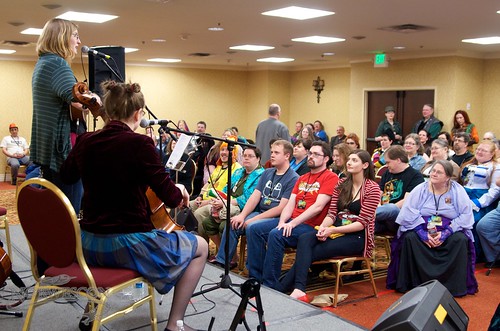 The Doubleclicks at nwcMUSIC 2012/Norwescon 35

See also: Sakuracon, PAX, any kind of multi-modal event that’ll draw people in on several fronts and also let you get personal with potential fans. Hell, Clallam Bay Comicon, where I was last weekend? Exactly the same thing.

Because that’s what you have to do: build that connection, and through that, re-establish the idea of value in purchase. Maybe it’ll be merch. Maybe it’ll be CDs. No matter how you count it, it’s about getting people invested in you, and therefore caring about what you do.

If you’re doing a convention or a show and only doing the concert? You’re missing opportunities. Get onto some panels. Be lively and entertaining and prepared. No panels you care about? Propose some. Make a god damned impression.

People also like event souvenirs. CDs can be souvenirs. Even download codes can be merch can be souvenirs – this is why my download code slips are shiny gold tickets, and not just pieces of printer paper. People react to that. Yes, I know, you first and foremost want people to care about your music! I’m in this because I want people to hear my stuff, not because I thought, “I know! I’ll GET RICH by MAKING MUSIC!”

Because that trick always works.

But if they don’t get your CD, or your download code, they can’t listen to your downloads or CD. So stop worrying about why they bought it and just hope they do. If they like you, if they liked the experience, they’ll want the token of being there, and once they have the CD or the download code, you’ve improved your odds.

Similarly, doing a house party on a house party, or house concert tour? Don’t just play and leave; go to the party. Then build in some time between house shows where you can hang out after the party with your hosts in a relaxed and fun manner.

It’s work, being “on” for hours at a time like that. It’s new and unfamiliar to many, including me. But people are doing music this way, and some are building careers, in this post-scarcity environment. It requires a gregariousness that you or someone in your band have to have, or be able to cultivate.

But it can be done. It’s one way forward from where we are now. Not the only way; but one way.

This time next week I’ll be in Toronto! I’ll be practicing some of what I’m preaching here. There will also be a Part Six of this supposedly-two-part series, which I’ll do my best to post from the road. I do want feedback and suggestions; we’re all making this up as we go along, and there is no well-trod path here. If you spot a landmark, give us a yell! Otherwise, I’ll see you on the road.

1: Which is to say, the kind of youtube video you see from phones at shows now? They used to clamp down on that so hard. Even still photos were often prohibited, and gods help you if you had a cassette recorder or microphone. People used to make special concert-taping equipment, like glasses with hidden microphones and wires that ran down your back. So crazy.

Mirrored from Crime and the Blog of Evil. Come listen to our music!