Hello, Thursday! Yes, I know, DIY day is Wednesday, I was busy, with Stuff. I DIDN’T FORGET YOU GUYS! <3

Now, let’s talk about why you really, really want an external sound device, rather than using your super-l33t gaming sound card. I mean, you paid good money for that thing, right?

Well, aside from the connectors and signal types, there’s noise. The inside of a computer cabinet is really, really noisy, from an electrical standpoint. And microphone signals are really, really small. The balanced signal noise cancellation falls over as soon as you hit the connector, so you don’t have that protecting you. And if you’re recording, the last thing you want is unintentional electrical noise on every track.

Having the sound card be outside the box, and converting everything to digital before it gets to your computer solves all those problems. It also lets you have the computer in a closet, where its fan noise and hard drive noise are nice and safely locked away from your microphones, and where it is safely out of the way your crazy bassist who likes to kick things. 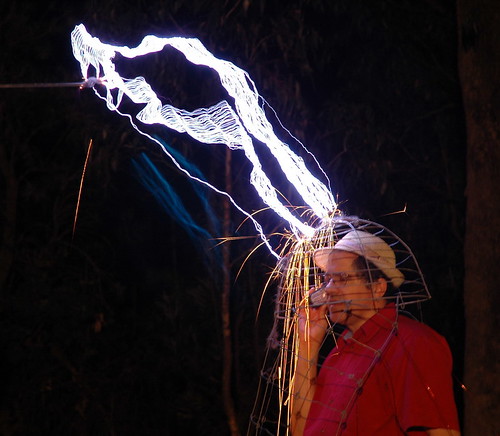 Also, from this guy.

But aside from that, let’s talk goals again. We discussed goals quite a bit in monitors and monitor amps: sound equipment is built to particular goals. Onboard soundcards are built to make cheap computer speakers sound better; gamer kit cards are built to make games sound awesome. And those are both really good goals!

But they are not your goals in the studio. You need sound equipment that is precise, and which treats different sounds similarly, across the frequency spectrum. You need AtoD and DtoA converters which are “musical,” which is to say, are accurate and even-tempered. You don’t want help, because you can’t be assured of getting it out in the wild when people are playing your music back.

I mean, if it’s all you have and you really, really can’t afford anything else? Fine. Of course you should use what you have. Chiptunes people can do this pretty effectively, as can anybody not using microphones or live instruments. Use what control you have over whatever sound card you have to minimise or disable all “sound enhancement,” “bass boost,” “loudness,” “surround effect,” anything like that you can find. Turn all that shit off, dig until you’re sure there’s nothing left to turn off, and you can do okay.

Honestly, people, it’s not that hard

But let’s say you’re not doing that. What do you need in one of these?

First: at least two inputs. If you’re willing to stick to recording one person at a time and not recording a drum kit, you can get away with only two. The inputs need to support XLR connectors. Almost all these days will also support TRS (a.k.a. 1/4″ plug, a.k.a. “patch cord”) connections on the same inputs; it’s a combined socket and really clever.

“But Solarbird!” I hear you cry. “You just told us last week, never use TRS connectors!” Wrong, minion! I said, no microphone worth the time will have those, and that’s still true. But a lot of other devices will have them – synth, electronic keyboards of other types, drum machines which aren’t purely software, Weird Shit You Build Yourself – it’s a big list.

You can even connect an electric guitar straight to one of these, and people will do that. If you’re a classic rock guitarist and want to sound like Tom Scholz? Now you know. (Okay, it’s a little more complicated than that. BUT NOT MUCH.)

Second: Those input connectors need to support phantom power. Phantom power needs to be switchable (on and off) separately to the device as a whole. And it should be 48v. There are specs now for lower-voltage phantom power, but a lot of equipment won’t work on it.

I see what you did there

Phantom power is a way of throwing DC power on the line in such a way that it’s invisible to the audio signal, but can still be used by the condenser microphone connected to it to power the condenser pickup. We talked a little about this last time.

Third: A headphone jack which includes passive or live or real-time monitoring in the unit itself. This requires some explanation.

When you’re doing multitrack recording – which is to say, recording one instrument, then another instrument, then vocals, all separately – you need to be able to hear what you’ve recorded so far, on headphones. These headphones need to be pretty sound-tight so that what you’re listening to doesn’t get picked up by the microphone again and re-recorded.

But you also want to be able to hear yourself, and good headphones will block a lot of the sound you’re trying to record as well. Trust me, this is important. You further need to hear the sounds you’re playing as you’re making them – like in real life – without any processing lag.

If your sound interface sends the microphone input to the computer and has the computer send it back for monitoring purposes, that will take enough time and introduce enough lag that it will really screw you up. Seriously, it’s like a tenth of a second or more.

So a decent external sound interface will provide the ability to throw both playback and what’s coming in the microphones back into the headset at the same time. Playback and microphone monitor levels should be separately controllable, too.

You’d think somebody would have a picture of a monitor lizard wearing headphones, would you. WOULDN’T YOU?!

Fourth: Studio monitor outputs. These will usually be RCA connectors, but might be TRS connectors. They’re for playing back things you’ve recorded on an amplifier – your studio monitor amp and the speakers connected to it.

Finally: Good quality analogue-to-digital converters and digital cable connection to your computer. You can get away with USB 1.1 equipment if you’re down at two channels or fewer; more than that, USB 2.0 is a bare minimum. Firewire and Thunderbolt are of course both better, but unless you’re working on a larger scale than anybody I imagine reading this will be doing, unnecessary.

Those are the required features. There are other options nice to have; inserts (to add effects boxes live on your inputs, if you feel the need to do that for some reason after input), pad controls for particularly “hot” input, things like that. They’re nice, but less important.

Plus, of course, more input connectors! Why that’s better should be obvious. But I need to point out here that more is not intrinsically better. Every additional input requires duplication of an entire channel of circuitry. Remember back on monitor amps, where I showed how the left and right amplification channels had mirrored circuits? Each additional input has another set of input channels, just like that.

Particularly at our budget, small differences in money make big differences in quality. Let’s take a couple of examples; I have a TASCAM US-800 (eight channel, six with microphone preamps) and an M-Audio USB Fast Track Pro (two channel, effectively).

If you do the math against retail – which is our best ratio, for getting at manufacturing cost – you’re spending $46.25/channel on the US-800, and $140/channel on the Fast Track Pro. And that shows up. Some of it is in features per channel, absolutely; the Fast Track Pro is quite feature-rich for its price and size. But it’s also audible. It’s also in the quality of sound.

Don’t get me wrong; the US-800 isn’t bad. I use it. It’s fast, it was hell and a half to get working on Linux (hi, I have a custom kernel configuration now!) but it works. But despite being more expensive overall… it’s noisier. The noise floor is higher. You have less room for error. There’s just a bit of crosstalk across channels.

You don’t have that on the Fast Track Pro. At least, not enough that I’ve been able to discover it.

Does that mean the US-800 is a waste of time? Not at all. Like I said, I use it. I use it when I’m hooking up multiple people at the same time, where I’ll have crosstalk anyway so who cares? Where the base environment is going to be noisier and the higher noise floor – which is still pretty low, to be fair – is going to be louder. In other words: in my places, it’s the right tool for the right job.

But if I’m multitracking myself, and it’s just me? I’m back to my old Fast Track Pro. No question about it. The sound quality, all else equal, is just that little bit better. If I can hear it, so can other people.

So that’s a basic overview of audio interfaces! We had some great commentary last week on microphones, mostly on the Livejournal echo, but also on Dreamwidth, including ideas for making your own pressure-zone microphone out of piezoelectrics and glass, a lot of commentary on micing bodhran, some thoughts on pickups, and the sudden and strange return to popularity of the ribbon microphone. If you wanted more on microphones, go check out those discussions!

Next week, we’ll talk a little about cheap/open source digital audio workstation software. And, of course, if you have any thoughts or questions on sound interfaces, let’s hear ‘em! Some of you guys are recording, what do you use?

Mirrored from Crime and the Blog of Evil. Come listen to our music!