The Arc of Conflict, Edda 20: The Acts of April

Chapter 2: Ten Days in April, part I is now posted.

And it's a direct continuation from the end of The Arc of Ascension, which was around 91,500 words.

Together, they tell the story of the rise of the gods, and that is right about a quarter-million-word story being wrapped up.

jfc, I wonder when it'll set in

(Of Gods and Monsters - not counting anything already written from The Arc of Dominion, next - is around 340,000 words. Will it make half a million? I don't think so. But maybe.)

Overwatch - or what is left of it - is at war with the Gods of Oasis. Russia is in a parallel war with itself, Katya Volskaya's government against the popular uprising led by the Aleksandra Zaryanova, the Goddess of Russia. As winter set in, Zarya's March to Moscow slowed to a crawl, held, waiting for a change in the weather.

But now, it is spring - a slippery thing, in Russia, but still inevitable - and the time for waiting is over.

Of Gods and Monsters: The Arc of Conflict
Edda 20: The Acts of April (Chapter One)
solarbird and bzarcher

SPECIAL NOTE: This is a four-chapter novelette, around 10,400 words long in total. It will be posted one chapter at a time over the long holiday weekend. This link is to Chapter 1.

Of Gods and Monsters: The Arc of Conflict is a continuance of The Arc of Ascension, The Arc of Creation, and In the Beginning, there was an Armourer and a Living Weapon. It will be told in a series of eddas, sagas, interludes, fragments, texts, and cantos, all of which serve their individual purposes. To follow the story as it appears, please subscribe to the series.

Of Gods and Monsters, Edda 20: The Acts of April

A novelette in four chapters

and the conclusion to the Arc of Conflict

(although there will be an extremely important coda piece to follow)

I got asked about my delivery-person snack box over on Facebook, so I thought I'd repeat my answer and pictures as a separate post in case anyone else is curious.

(I've received several thank-you notes from people, and been told a couple of times by delivery and ex-delivery people now doing other jobs that they absolutely survive on these things so please keep doing it.)

I keep mine in a cooler, due to weather reasons. This one is a good mix of cost and size. Delivery people are on tight schedules so the sign needs to be simple and clear. Mine says "Snacks for you!" on top and "SNACKS" on the front. 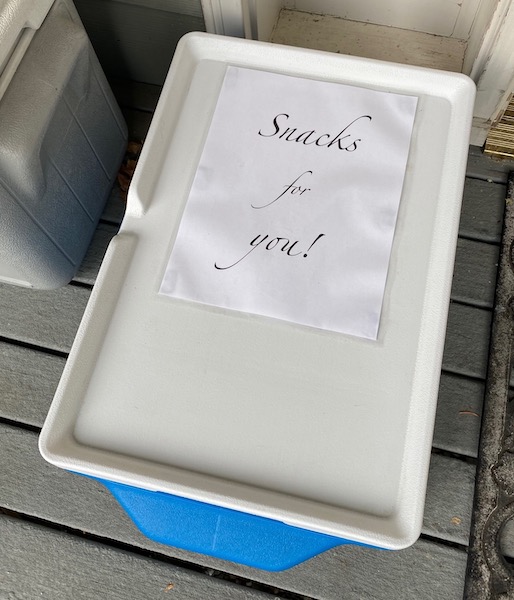 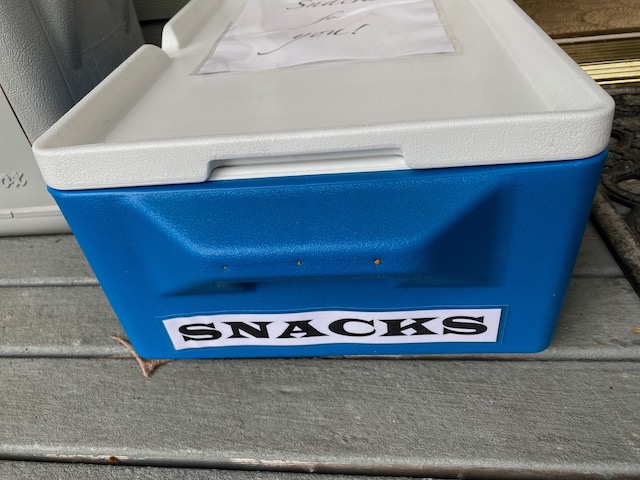 Snacks are all inside the cooler. The drinks are in a separate plastic bin to control condensation happening due to the cold packs. I have two sets that I swap out of the freezer. The food snacks are mostly in a box that I lined with shelf vinyl to provide an additional barrier, and the chips are something new I'm trying. 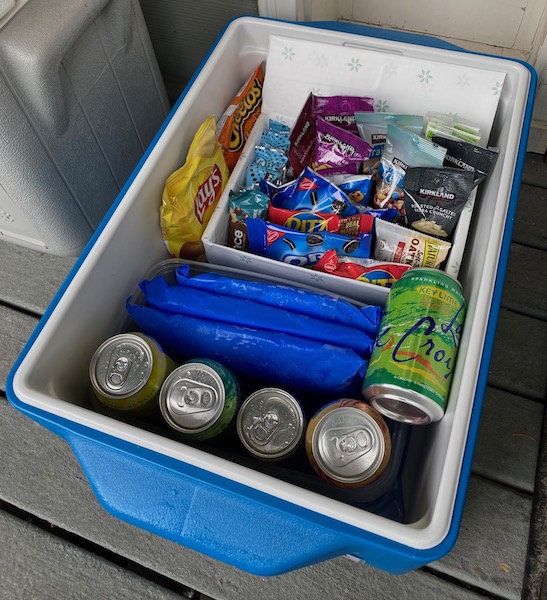 The drinks are just stuff we drink. The snacks I buy in assortment packs at Costco. We eat some of them too, but not most of them.

The lid stays on - they're willing to take the lid off if it's clear they're supposed to - which is good both for hot weather tolerance and keeping rain and snow out.

And that's how my delivery person snack box works. It wasn't my idea, I stole it from a viral video a couple of years ago. That person just had snacks out in a basket, so that works too. But our front porch isn't sheltered enough to do that in rainy season or summer, but from different angles, so I came up with this.

So I'm one of those snack box people for delivery agents, right? A dedicated cooler by the front door, I put cold packs in it, all that. It's nice. I've received several notes of thanks.

FedEx haven't once brought up a package to the door. They leave them on the stairs like all of the time.

The snax cooler has been labelled only on the top. Last Tuesday, I added a label to the front. You can only see it once you're halfway up the stairs but it's quite visible once you're there.

The very next FedEx package on Friday made it all the way up to the front door.

And I'm honestly not sure how I feel about that xD

So the HVAC built a bunch of platform - by which I mean "floor" - in the attic, both to do the AC ducting installation and to provide service access later, and some of it was really quite well done (where they were working most of the time and where they'd need to stand if they needed to do service) and some of it was iffy and a little of it was frankly terrible, so today I got up there and made it all properly sound.

It wasn't that difficult, just had to get creative with lumber, subfloor glue, and screws. But now there're no more "butterfly" platforms (secured to one joist in centre with the sides flying free like wings) and no serious soft spots and if something looks strong it actually is and if something seems kind of weak it probably is but it's stronger than it looks.

(All of it is, obviously, much improved.)

Anyway when I was done I realised that 1) we have a proper attic now, as one bloody well should, one with a floor and lighting and even an outlet and 2) that means we now have a FIVE level house because it has a floor and it's full height THAT MAKES A ROOM ON A NEW LEVEL AND THAT MAKES A STOREY

sorry that's just the rules FIVE STOREYS even if one of 'em is staggered so some people might call it four and a half but that's bullshit and besides I got news there's ANOTHER hidden staggered floor level that's half-height (the crawlspace which is on its own level) so that's ANOTHER half storey so that's FIVE EITHER WAY.

I don't make the rules i just exploit 'em

This tweet sent me down an unexpected audio production rabbit hole:

R. Derek Black - 6 May 2021:
I think I love every one of the like 15 different versions of the song Valerie I’ve ever heard

I went to listen to the Amy Winehouse version first, and look for some of the others, but I saw on Wikipedia that Steve Winwood co-wrote it originally, and listened to the '87 version that was a hit, but also...

...someone had posted the original 1982 release, from his third album according to Wikipedia, and listening to it, I'm like...

It's not the song! It is a good song. But the production is garbage.

And I'm not talking, like, artistic garbage. I'm talking about "basic mistakes in recording by first-time artists working in a bedroom" garbage. "Oops, hit the mic stand there and it's really loud, oh well we'll just compress it out" levels of "let's record a demo" bullshit.

(There are also questionable artistic decisions, particularly the synth someone set on "saxophone" - but it's '82, I'll cut them that slack.)

But... jeez. Even the vocal track is recorded badly. Plosives, hand noise, all sorts of crap, all clearly audible in the single.

And if there was a thing called dynamic range in '82, that engineer hadn't heard of it. It's like the loudness wars, but kinda weirdly... quiet.

They smoothed over most of the recording fuckery in the '87 remix. There's a nasty plosive on a B that they couldn't completely fix despite their best efforts. But it's a nice salvage job. Plus, a much-closer-to-real sax, unburying the guitar, restoring dynamic range - good work.

Shame about all the heavy gate reverb on the drums, though.

eta: and it smells bad. like new installs always do. it'll be fine.

Talking to the electricians, getting them the layout of the building, not sure they're going along with me on much of what I'm saying. Half an hour later I hear extremely promising noises in the floor and react like the cat would, and end up finding out they were able to run the wire exactly as I'd suggested, with one of them telling me "It was like, 'holy shit, she was right! She really did her homework!'"

I love being right. xD